How the Iroquois Contributed to the Confederation of Canada 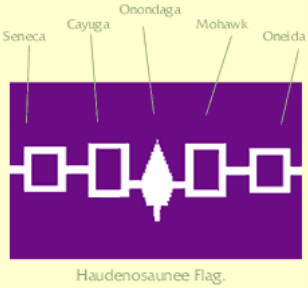 The Haudenosaunee Flag or Hiawatha Wampum belt represents all the nations of the Iroquois.
The symbol representing the Onondaga is representing the tree of peace as well.
(The tree of peace is a white pine tree that is said to have been used by the creator to represent peace, strength, the will to not fight against one another, and protection when abiding by the great law of peace.
(The great law of peace is the laws that were given to them by Deganwidah.
Deganwidah is also the one who, according to the Iroquois histories, came and brought the 5 nations together under peace.)) 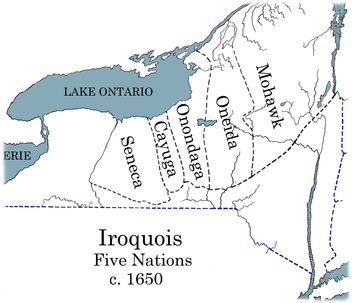 The Iroquois Confederacy was founded around 1142 and was comprised of 5 nations: The Seneca, The Cayuga, The Onondaga, The Oneida, and The Mohawk.
(A sixth clan, The Tuscarora, later joined the confederacy in 1702 because of Europeans making settlements in their home lands.)